AdoptOpenJDK Quality Assurance (AQA) is a curated set of open tests that we run against our release builds at AdoptOpenJDK. These tests assess whether a binary meets the high quality standards expected by enterprise customers. They verify that binaries are:

The tests are selected in the spirit of the AQA manifesto, the set of guidelines that governs our actions when testing OpenJDK releases. A brief summary of the manifesto is that tests should be:

AQA is not just a set of tests, but a system that keeps tests fresh and applicable using gathered metrics and input from the community. We want to “make quality certain to happen”, that is to assure quality for the community by being transparent, open and actively inviting community involvement.

Should you have feedback or input, please add comments to the AdoptOpenJDK/openjdk-tests AQA issue! 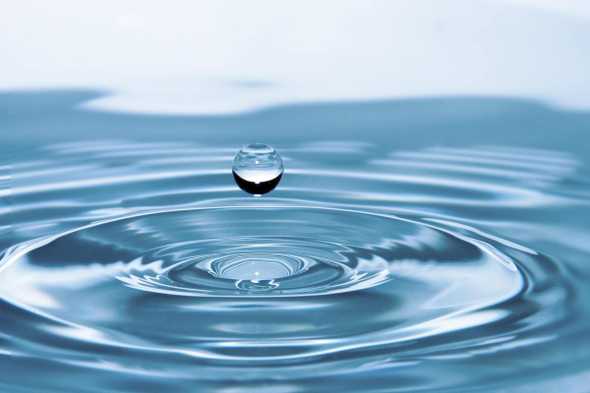 AQA v1.0 is a first drop in an on-going series of improvements.

As I dive further into this topic, I will attempt to avoid too many water metaphors sprinkled throughout this introduction to AdoptOpenJDK Quality Assurance (AQA) …or AQuA if you are so inclined.

When the Well is Dry, We’ll Know the Worth of Water.

Why AQA? We believe that open languages deserve open testing. When we looked at what testing was openly available to developers and to OpenJDK implementers, and running on visible servers, the ‘well’ was somewhat ‘dry’. There’s the OpenJDK regression suite, a wonderful set of tests, but does not cover all of the verification requirements needed to “make quality certain to happen”. Those regression tests begin to address the functional correctness requirement but we also needed to verify the security, scalability, performance, durability requirements. Our roadmap arose from the lack of a large and diverse pool of tests being used to verify the quality of OpenJDK binaries, and the desire to run testing in the open. 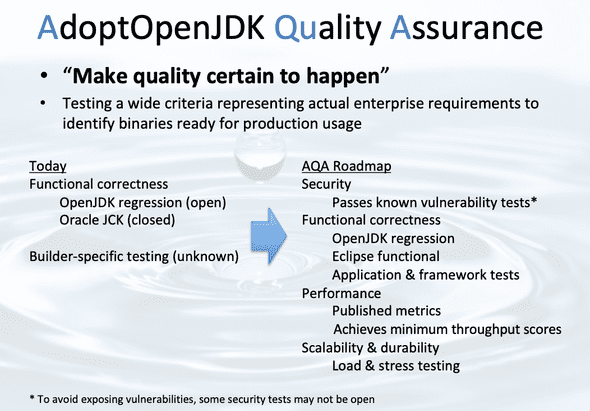 Tests at AdoptOpenJDK are divided into groups:

Each group is split into 3 levels:

For version 1.0 of AQA, we selected tests that ensure our build and test mechanisms are working as we expect. Each of the 123 test targets in v1.0 contains many test cases. A few notes about the set:

Additional details about the test targets can be found at the Graduated Testing & Test Numbers wiki page. 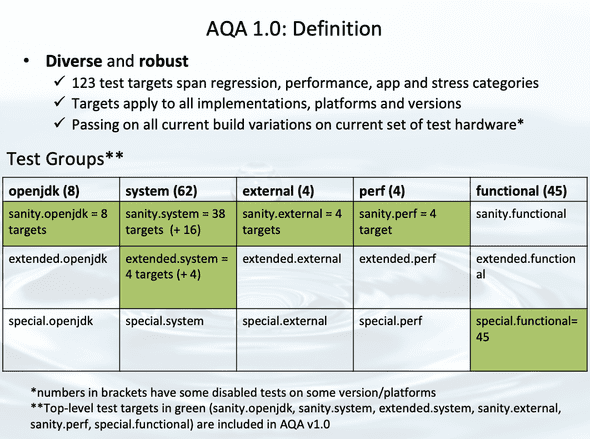 Multiplying the versions, platforms and implementations expands the grid into a much larger test matrix. The implementations refer to different builds (J9=OpenJ9, HS=Hotspot and Upstream respectively) which are available from adoptopenjdk.net. 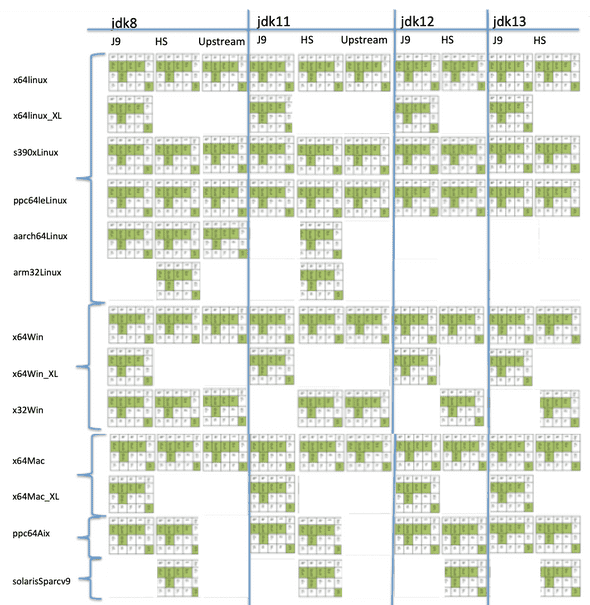 In upcoming versions of AQA, we will broaden the test coverage and increase the number of tests that must pass and set some baselines for the perf test targets in order for binaries to receive the AQA stamp of approval.

Our goal and intention is for AQA to provide the community with a valuable quality assurance toolkit and set a high bar for OpenJDK binaries being produced and distributed. We believe that working together on this toolkit in an open and collaborative environment will be beneficial to all implementers, developers, consumers, and stakeholders within the open community. 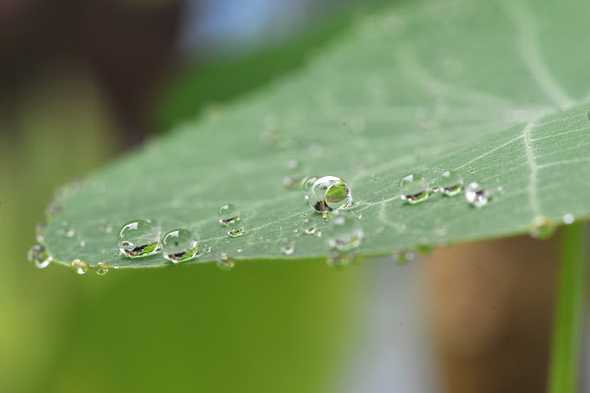 You can check out this lightning talk on AQA or drop us a note in the AdoptOpenJDK Slack channel devoted to #testing topics, or dip into some of our test documentation to get involved.